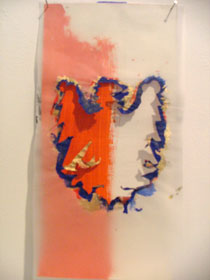 Horror fractured in the diffuse light of milky television screens. Invisible yet perceivable. A continuous threat repressed and nonetheless present. Photographs from Bosnia, Rwanda in the aesthetic of color magazines: an aesthetic of horror in a realism that lies to itself through its absolute authenticity. Disney-fying the Golf War – with computer games saying war is clean – is virtual reality. But war is dirty. War is horror. War is madness. Here the beast of humanity shows its terrible grimace. War is a business. War is a handcraft. The unfathomable is legitimized. The highest consecration becomes a part of the lowest. The noblest thoughts are misused toward its justification. War is a ritual. The symbols in blazes of ornamental color. The protagonists in fantastic costumes – an opalescent festivity – a bloodthirsty orgy. The dance with death. Like ghosts, beautiful masquerades for the brutal logic of death. Life is dissected in cold consequence. Art could never avoid this underside of the phenomenon of civilization. Painters, musicians, poets have tried. Pictures, music, poetry have been used. Great artists failed in the attempt to portray the unshowable, have resigned themselves to the attempt to process the intangible. What remains is the confirmation of one’s own helplessness. Salah Saouli, born in Lebanon, forced to witness the ruin of a blossoming land, always catches up to this trauma. Even after years in the apparently healthy western European world. Here on the Schlachtberg with the war memorial of a failed state dedicated to the bloody massacre of May 15, 1525. Here, where Werner Tübke in his reflections on the phenomenon of war in a time of upheaval sought refuge in the art of the times and arrived at philosophical distance in painting. Saouli also refers to the woodcuts of that time. The death dances, the documentations of horror and the vindicated dogmatists. Graphic structures on giant transparencies – and become transparencies of horror itself. Brutality reflected in the graphic black and white remains noticeable. The result is more than an image – one must pass through the images. It is impossible to elude them. The repressed comes over us. We look into the light boxes. The odd gaiety of the situation diminishes in light of the theme. A space from which there is no escape, but also no solution.
and the wars go on the way we’ve always done before

The black and white world of horror is joined by the gold of contemplation. Gold adorns ritualistic instruments. Crests and symbols are gold-plated. Mystical pictograms. Bright colorful flags fly before the temple. The fiction has caught up with the reality and appropriates its resources. Colors play poetically on the flagpoles of the concrete gray memorial. Butterflies of the night pierced on bayonets and still unattainable. The brilliant gaiety of poetry flees the bleak gravity of ideology. There is hope. “images, Rückblick nach vorn”, Catalog by Salah Saouli, 1995
From German by Alisa Kotmair 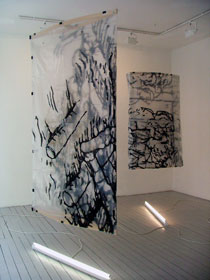 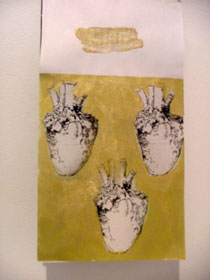 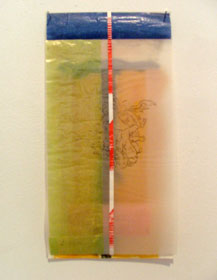