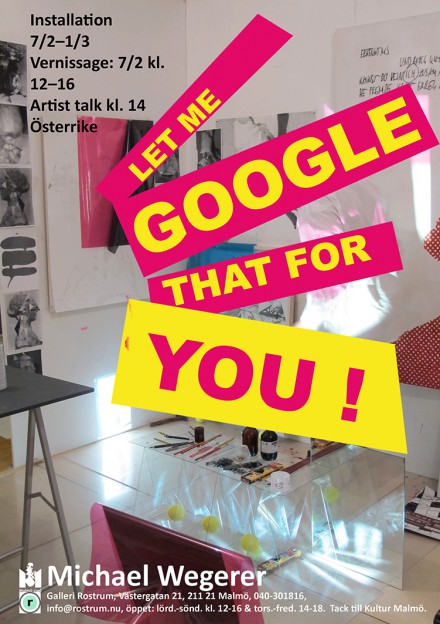 The works shown at Rostrum are dealing with the grammar of objects and images in relation to a particular place: Malmö. The images are originating from Michael Wegerer’s virtual travels on the Internet, as well as from his stay in Sweden in June 2014. He transmits elements and fragments of reality by one or more process steps and translates it to a new and subjective context. Sticky-foil, screen prints, objects and the medium of video are reciprocally brought into dialogue. In this process of exchanging and the multimedia approach, the environment of the exhibition space, on which the artist continually directly refers to, is playing an important role for the reading of the work. Hence the exhibition can be conceived as a spatial installation, that reflects the mutual exchange between objects and graphics, as well as vision and reality.

Michael Wegerer, born in 1970. 2008: Completed studies in visual and media art at the University of Applied Art Vienna with honors. 2009-2011: Master studies in Fine Art Practice at the Royal College of Art in London, later guest lecturer at the RMIT University, Monash University, Charles Darwin University in Australia, Manchester University, Shanghai University China and at the Wimbledon College of Arts in London. Since 2008: Member of the Künstlerhaus Vienna. Lives and works as an artist in Vienna und Lower Austria.